Swimming with Wild Dolphins in Kaikoura

It’s not often that I voluntarily set my alarm for 4.00 in the morning.

Sure, I’ll get up early if we need to break camp in good time or if there’s a flight to catch.  But organising an activity which starts before the sun gets up? Errm, no thanks.

So when Terry’s phone started beeping at us in the ungodly hours of a morning sometime last week, it took a lot for me not to throw it at him.

But why did you have to pick the early tour? I grumbled, struggling into my clothes in the back of the van. It’s so freaking early.  Surely nothing is awake right now.

Well, almost nothing.  On the short drive into town there were plenty of rabbits waiting to prove me wrong, but other than that the world was most definitely sleeping.  Kind of like I wanted to be.

Terry peered through the fogged up windscreen, avoiding errant bunnies with ninja like precision.

You do realise we’re up this early so we can go swimming with wild dolphins, right?

Oh well, yeah.  But could we not have gone later? With all the sensible people still tucked up in bed?

Maybe you’re like me, and pre dawn hang outs aren’t really your thing.  But let me tell you something. If you ever find yourself in the sweet little New Zealand town of Kaikoura deciding when to do your dolphin tour, just go right ahead and choose the 5.30am option.

There are practical reasons for this.  The dolphins tend to be more active early in the morning, when they’ve just come in from a night’s hunting.  Plus, you’ll be back and showered and ready for the day while everyone else is still eating breakfast.

But the actual reason why you should go for the early tour?

Because before we had seen even a single dolphin, we were whizzing along in the boat watching this.

This was maybe one of the most beautiful and majestic  sunrises I have ever seen.  It stretched along practically the entire horizon, bathing the ocean and the sky and even our tiny little boat in colour.

By now, I had officially forgiven Terry for waking me up at 4.00am.  In fact, I was positively bouncing that we were about to go swimming with wild dolphins during such a magnificent sunrise.

We were heading out on our trip with Dolphin Encounter Kaikoura.  They’ve been operating since 1989 and do not feed, trap or otherwise influence the dolphins in the area.  These beautiful creatures, mostly dusky dolphins, come into the bay of their own accord, and interact with boats and swimmers all of their own accord, too.

While we were getting kitted up with our fins, wetsuit, mask and snorkel back at the encounter HQ, we had watched a video on how to best attract the dolphins’ attention.

As we sped over the water, I went through all the advice in my head. Keep your arms by your sides. Swim in circles.  Sing through your snorkel.

I got the feeling we were all going to look pretty silly once we were off the boat.

It didn’t take long for us to spot the first of the dolphins, leaping and gliding through the silky water.  They were ridiculously playful, jumping up close to the boat and doing all kinds of crazy back flips.  Things were looking good for our swim!

I’m usually a huge baby when it comes to cold water, but when the horn sounded for us to jump off the boat, Terry and I were first in.  Snug in my wetsuit and hood, I honestly didn’t even notice the cold.

Soon enough, the dolphins came over to investigate.  Squeaking and clicking through my snorkel I tried to turn in circles fast enough to keep up with our new friends.  They definitely toyed with us, spinning round faster and faster until I had to give up, dizzy and exhausted.  Then, after a few seconds, they would come back and start swimming round in the other direction!

We’d been told not to be disappointed if swimming with wild dolphins wasn’t exactly what we’d imagined.  They don’t always show a huge interest in the swimmers, and it’s not guaranteed that they’ll want to play with you.

Well, we lucked out with our very first go in the water.  In the video below you can see one dolphin playing with Terry and I for ages.  It was magical!

After a while, though, the pod moved on and the horn sounded for us to get back on board.

Our dolphin followed us all the way back to boat.  I was so sad to get out of the water!

Luckily, we had another two swims before the end of the trip, both times with huge pods.  These guys didn’t show as much interest, but we didn’t mind.  It was still incredible to be surrounded by dozens of beautiful dusky dolphins as they played and swam all around us.

By the time we got back on the boat for the last time, the sun had completely risen.  It was shaping up to be a beautiful day back in Kaikoura.

We hosed hot water down our wetsuits to warm up and then began the journey back to harbour.

I was feeling pretty sea sick after all that swimming in circles, so I sat right at the back of the boat.  Keeping an eye on the horizon helped me feel less queasy, and it also meant that I could watch the dolphins for longer!

Swimming with wild dolphins in Kaikoura wasn’t the first time we’d got close to these magnificent creatures.  We were lucky enough to surface into a pod of them while scuba diving in Brazil last year, which was as amazing an experience as we ever thought we’d get.

Getting the chance to swim with them again was maybe even better.  They were so playful and curious!  I’m still half contemplating going back to Kaikoura before we leave the South Island, just so that we can go again.

Well, maybe not on this trip.  But hopefully one day.

Have you ever been swimming with wild dolphins? Tell us about it! 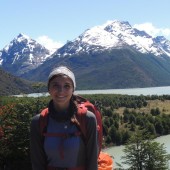 Should I Buy or Rent a Car in the USA as a Tourist?

Living out of a van – is it worth it?

Kepler Track in 3 Days: What you need to know